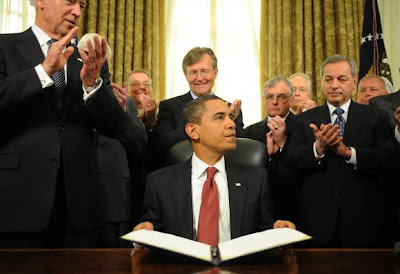 Well, well, well. I was wondering when it was going to happen. I knew it would, couldn't wait for it and now it has and....

Nah, not Barack being elected President. It was enough black people standing in line day after day during election week in my hometown alone that I felt fairly certain. I had the same lingering doubts of black folks everywhere: That maybe "it" could never happen and that even if he got the votes there would be some trickery. And all the way up to the inaugural with the whole "is he an American citizen" bullshit and a host of other challenges that we probably never heard about, black folks and any folks who voted for Obama were holding their collective breath until Jan 20. And they breathed a sigh of relief only to hold it in again as Chief Justice John Roberts flubbed the swearing in and finally, everyone was able to breathe out a second great sigh of relief when we found out they did it again the next day JUST to be on the safe side. Problem solved. Oh, and they probably will take the advice I heard on the Tom Joiner Morning show from a black Harvard educated lawyer saying that anything Obama signed before the second swearing in should be signed AGAIN.

New ground, it's a black guy - hell half of America doesn't believe Black folks are citizens or still believe we are some sort of hybrid second class citizen with nearly the same full rights of white people as defined by white people.

So when most breathed that collective sigh of relief I didn't. Because I KNEW that Obama was going to come against that attitude in the Senate. I know it's expected from the GOP but don't think there aren't some Dems who won't unconsciously take that attitude as well.

Yes Obama's the President. But he's a BLACK President. Kind of like when black people move into a white neighborhood and somehow that neighborhood just doesn't seem as desirable as it did 10 seconds before the UHaul showed up instead of the Mayflower Van.

I knew that the GOP would be expected to be given all the due deference of their collected generations of whitness. And after they recently laid out their grievences with Obama's plans about the economy, Gitmo and well, hell, just about everything the hell else, Obama put paid to that notion with two words:

If you don't know what that means, get some black friends, really, you're long over due. My translation is simply this: Black or not, President Obama is truly the President and won't be letting the GOP smack talk him into false subservience. He has the swagger (that vaunted "arrogance" the media kept trippin over") to pull this off and get shit done.

I think I'm finally in Obama love - a love I haven't felt since my fourth grade crush on Jimmy Carter. Yeah, say something. I dare you. But yeah, if this is what the next four years will be like it - Bring It On.
Posted by ThatDeborahGirl at 4:23 PM No comments: Links to this post

CNN - Sycophants to the last, edited the booes out of their live mix - how the hell they did that I can only say thanks to the advent of digital television - we're going to be getting a lot of live editing - a few seconds delay will mean a LOT.

The clip I saw on YouTube (I'll add it later, being lazy today) - I guess the poor commentators had to say it, but they were lamenting over the booing. Oh, poor taste, bad form, I'm sorry to hear that. Oh, they shouldn't do that.

Which just goes to show how far we've come from America - Home of the Free to America, Home of the PC. I'll watch any number of racist pricks on Jerry Springer in full Klan regalia taking advantage of their First Amendment rights and being decidedly un-PC in exchange for the continued right to boo or jeer at ANY public official responsible for the mess George Bush and Co. have left us in.

Not to mention how he leaves is how he came in. How quickly we forget that people were booing back in 2001 when he jacked the presidency in the first place AND throwing eggs and rotten tomatoes at his motorcade. He didn't get to make the walk to the White House that year. It's only out of respect for Obama that most people stuck to booing and singing that Bush was out of the Oval Office. You gotta love the black folks singing "Hey Hey Hey, Goodbye!" Brave souls every one of 'em and God Bless 'em.

I know - take the high road, turn the other cheek. Whateva. Georgie and Laura, George Sr. and Dick Cheney, Rummy and Rovey, Ricey and Wolfowitzy - get the F out. You ain't gotta go to Crawford but you got to get the hell out the White House. Let the doorknob hitcha where the Good Lord splitcha - hit the road jack and don'tcha come back no more, no more, no more, no more...

Yes, Dear God, I'm bitter, about the past 8 years. It's gonna take 8 years of Obama minimally pissing me off (still can't forget FISA) to get the sour taste of our broken Republic out of my mouth.

I'll do my semi-fan-girl welcome of the Obama's tomorrow. But today. I'll just heave a sigh of relief that the Bush years - hopefully and thankfully- are OVER.

Slip out the back Jack
Make a new plan Stan
You don't need to be coy Roy
Just listen to me
Hop on the bus Gus
You don't need to discuss much
Just drop off the key Lee
And get yourself free!
Posted by ThatDeborahGirl at 10:37 PM 2 comments: Links to this post

When I went back to school last June, I really thought I wanted to be a Web Designer. I took up the Multimedia and Web Design course wholeheartedly only to realize three terms later that I can think of nothing more boring than designing and coding websites all day. However after four years of blogging, I realize that I do like to write so I may just be changing my major to Professional and Technical Communications. Sounds more along my lines and still has to do with Multimedia.

My daughter just completed her junior debutante year, and it was brought home to me that the minute her junior cotillion ended, she became a senior debutante, despite still being a junior in high school. But the future, it seems, is now and I must begin planning NOW for her cotillion in December. Some changes take place in the blink of an eye and that is one I should have been prepared for and decidedly was not.

Barack Obama built his entire road to the White House on a platform of change. Many naysayers doubt that he can or really wants to change anything - noting his cabinet picks, his speeches, his budding policies and the actions of his transition team. However the man has yet to move so much as tie clip into the White House yet so at this point all any of us can do is speculate. I'm willing to believe, much as Sam Cooke did, that A Change Gone Come.

And poor George W. Barely president for the past eight years, he is spending his final days of sevitude meting out the evil wishes of George Sr. and Dick Cheney - ensuring that Obama spends his initial days in the White House working to undo the last bits of treachery the Bush/ Cheney cabal can render during the waning days of the Bush Presidency. It's as if they thought they would be allowed to stay forever. And now that it is evident that any remnants of the Bush administration and family have long outstayed their welcome, it seems they cannot let go of their White House dream. But it's over folks. The change we've all been waiting for is here and dear God, let it go Bushies, let it go!

19 days and counting - and Obama will be sworn in.

Thank God for Change.
Posted by ThatDeborahGirl at 10:10 AM 2 comments: Links to this post