So the White House, with the quiet sanction of President Obama, is finally saying what the rest of us already knew: FOX "News" is not a news station but a propaganda outlet.

Uh, duh. Maybe the President will actually answer that little boy's question next week: "Why do people hate you?"

Cue for Beck, Hannity and the other spinners saying this is an attack on the press and the media in general, instead of a single finger pointed at FOX Network.

Seems I've been writing this blog post in bits and pieces but I really wanted to add this part.

I don't know when it occurred to me that I could be a boycott of one. I guess it was when a good majority, but not all, of Glenn Beck's advertisers bailed on him. Despite this fact he's still on the air and that was when I made up my mind:

I will simply not watch FOX Network programming, media or movies. Period.

It means reading the backs of DVD's before I buy or rent them. 20th Century Fox movies are out for me. It also meant giving up a show that I really like. House has been a very entertaining medical drama for me, but it's not worth supporting FOX to watch it. Likewise, Ye Olde Matey came to me last month about this great new show he'd discovered, Lie to Me. I told him I wouldn't be watching it because it was on FOX and that was the show they had aired instead of President Obama's speech. Also, my mother has become a fan of the new show Glee. I watched it with her a few times not realizing what network it was on. But now that I know, I've giving it up.

Below is FOX Network's Primetime Lineup for Fall 2009. If you watch any of these shows, please consider that you're supporting the likes of Glenn Beck, Sean Hannity, Karl Rove, Bill O'Reilly, Michelle Malkin and Laura Ingraham, helping them to continue to spout conservative propaganda: 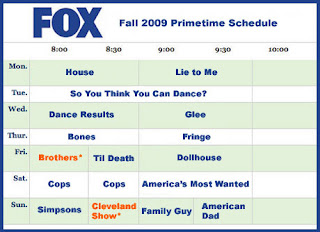 Posted by ThatDeborahGirl at 10:48 AM 2 comments: Links to this post

Sunday, my daughter finally handed over to me the 13 page Policy for Random Urine Drug Testing of North College Hill City School District Students. Although it's voluntary, I only have to give up my daughter's "privilege" of being in any of her school's extracurricular activities if I don't sign the "voluntary" form.

This is no small matter.

My daughter plans on majoring in musical theater, but if I don't sign, she won't be able to participate in her school's Thespian Society. She is also in marching band. Attending performances is part of her grade, so if I don't sign, she can't march at football games or sit in the stands at basketball games for Pep Band and she'll fail band. She wouldn't be able to participate in Service Leaders, her school's community service group.

She wouldn't be able to go to her Senior Prom.

Her grades are mostly B's with an A here or the odd C in Chemistry or Calculus. As I never made it to Chemistry or Calculus, I can live with that. She's a well-rounded, civic minded, church going (she goes with Grandma even when I skive off), stellar student who has taken advantage of everything her small-town school has to offer.

And for this, they reward her with the promise of random drug testing.

And she couldn't care less. What she's mad about is that I am refusing to sign over her rights. That's really the kicker in all this. She's not mad at the people who are more than willing to make her pull down her pants and pee on command for the right to be in Band, Drama and Service Leaders. No, she's angry at me for not signing.

I've talked to some other parents. And they signed. Not because they agree with the policy. But because their children, too, are angry at them for not signing under threat of not being able to participate in after school "stuff". You'd think us parents would have enough sense to band together - but everyone's too busy trying to keep a roof over these kids heads and food on the table. No one has time for a well-reasoned rant, let alone a good old-fashioned protest.

I sent her school superintendent, Gary Gellert, a very politely worded yet obviously angry email. And he called me back. The better not to have his comments on the record. He worked very hard to assure me that it's no big deal and that ends justify the means. "Yes it may step on the rights of a few students..."

Which was really all he had to say. He knows it's wrong. But he's willing to do it anyway. I wonder if the grants the federal government is giving out for schools who expand their student drug testing has anything to do with his support of this decision? I wonder how to find out if NCH Schools have recieved that money? That would explain a lot.

My mother informed me that I'll be "ruining her life and her Senior Year" if I don't sign. My daughter has made it patently clear that she couldn't care less what a civil liberty even is as long as she gets to participate in Drama. I offered to send her to Playhouse in the Park or Clifton Arts Center or anywhere...

But it's not just Drama. Unsaid but just as out there - it is unthinkable that I should allow her to miss Prom. I just couldn't be so cruel and mean. Even I have to remind myself that I'm not the bad guy here.

"But the drama program at school is free, Mama," she insisted.

I guess I'll sign the paper and despise myself and Gary Gellert and school board members and all the others across the country who think that drug testing our children is a good idea. It's a popular idea and catching on fast. Coming to a school district near you soon enough. It started with testing student athletes for steroids. Then steroids and banned substances (pot & coke folks). Now it's all the rage to test any kid who so much as wants to be in Chess Club. And for all you folks who are keeping score, yes there are now districts who just want to make sure all kids are eligible for random tests because, hey, why leave anyone out at this point?

The form stresses how very voluntary and non-punative this matter is. The double-speak is as amazing to me as everything else. It's not voluntary and she will be punished. Either way. And regardless of the fact that it's being shown that testing may doesn't have a real effect and just pushes kids towards substances the tests don't catch...