Or anyone in the local news media for that matter 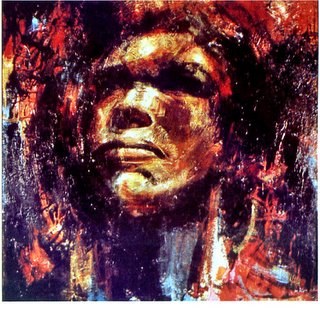 Part One - Every family has their "Remember When" stories. In my family we refer to this as "The Naked Man Story". This story made the news but you would probably find very few people, if any, who remember this story about yet another black man who died while being apprehended by CPD; even I, who was there, do not know this man's name. This is one of those stories that may leave you humming "He Had It Coming" as if you just watched "Chicago" and can't get the tune out of your head. Yet some of the details and one question in particular still leave me wondering.

I lived with my one-year-old daughter in a tiny one-bedroom apartment at the top of a short, steep hill street called Intervine. My daughter had spent the weekend with my parents and they were bringing her home. I had been doing laundry and a friend who had taken me to the laundromat was having a well deserved glass of lemonade after helping lug all my stuff up the stairs.

My daughter and I were on the front porch, waving goodbye to Grandma and Grandpa when suddenly a man ran out of the apartment building onto the porch where my daughter and I were standing. He was stark naked and had a steak knife in his hand, the kind with the serrated edge and a wooden handle but still basically a table knife.

He said something like, "That bitch, she's after me. Help me."

I had seen a woman come and go from his place but I'm not the nosy neighbor type. I had no idea if it was his wife or girlfriend but I assumed that for whatever reason she had thrown him out with no clothes. I'd seen this on TV but never in real life and found that the reality made bad comedy.

"I just got done with my laundry. I think I can find you some shorts and a T-shirt that will fit," I offered.

He didn't answer except to keep mumbling to himself and then he started stabbing at his own legs with the steak knife. At this point, of course, my parents and I realized that this was no mere domestic squabble. I figured the man was high on something, but I was standing on the porch with my baby in my arms and no way to get away without attracting his attention.

My mother started walking towards the man. I have no idea what she was going to do and I was trying to motion to her to stay back. My stepfather moved toward her but she was already halfway up the stairs. All she saw was that her daughter and granddaughter were in danger. If he had given her the chance, she may have kicked his butt for all I know.

He ran towards her then he past her, past my stepfather and jumped into the backseat of their car. My stepfather thinking quickly locked the doors with his automatic key tag. The man was rocking back in forth in the back of the car, still talking crazily to himself and stabbing at his legs. He was bleeding now and the white interior of the car was stained heavily. My stepfather sent my mother and me inside to call 911 and he would stay outside with the crazy guy.

We ran inside, called 911 and explained this to my friend. We all went back into the entryway to watch what happened through the glass door. We were just in time to see the man jump out of the car and run stark naked down Intervine Hill. We'd forgotten that even with the car locked, the door would open if the latch were pulled from the inside. We watched as the naked man dodged behind a couple of houses and then was out of sight.

The police came soon after the naked man bolted. They saw us all standing outside and correctly guessed that we were the ones who called. We told them where the man had run and no sooner than we said it they got another update on their radios. The man was trapped inside one of the houses down the hill. He had run into a house where a lady rented rooms. When he barged in holding a knife, the two guys who lived there managed to shut him into a closet while the lady called 911. The policemen drove back down the hill in a hurry and entered the house where the naked man was trapped.

As we stood there waiting for the man to be brought out in handcuffs, news crews from Channel 9(WCPO) and Channel 12(WKRC) showed up. They interviewed my parents. I had nothing to say. We waited some more. The reporters gave updates at odd intervals and then waited with us.

Then the ambulance came.

What I was too young and naive enough to know back then is that when you call the police on a crazy, doped up black man, you have signed that man's death warrant. The man had been warned, then tasered and combined with whatever he was hopped up on it was enough to kill him. A police officer came over and gave us the news.

He also told us that although the man was already dead, they were going to bring him out of the building on a stretcher with the EMT's going through the motions of CPR. The last thing they needed was the perception that the police had killed him. The reporter nodded in agreement and turned to her camera guy to get ready for the naked man's exit. My parents, my friend and I all looked stunned. Before we could answer, the policeman walked away, waved at another cop and then they went through the ruse of trying to resuscitate a dead guy for the cameras.

The policemen were very kind to us. They drove us to the police station where they took our statements. They asked several times about the incident. We were also asked if we felt the officers should have handled things differently. I told them we never saw what they did in the first place so we had no idea. I could only tell them what happened up until the man ran down the hill. That's all anyone with me knew. My family nodded in agreement. That seemed to be a good enough answer. Since we didn't know what the officer's did we couldn't claim the man was killed.

Thinking about it later, I really didn't think they had. The man was obviously hopped up on something and that along with the taser was too much for his heart. That's what the cop had told us. I was so young it took me forever to really question this incident. If it wasn't their fault, why pretend the guy was alive when he came out of the house? Why were the reporters so willing to go along with the cops' story instead of reporting the truth? Did this type of thing happen between the press and police all the time?

Did the naked man have to die?

We answered a few more questions, there were some papers to sign (I have no idea what they were) and we were driven home. My parents got the damage repaired and the car cleaned but their memory of the incident couldn't be erased. It wasn't long before they got a new car. My friend never volunteered to take me to the laundromat again.

It would actually take another, and much more unpleasant run in with CPD before I would move away from Intervine.

(Part Two of this story will be posted on Friday, February 24.)
UPDATE: Link to Part II