Mitt Romney does not understand the difference between "We" and "I" 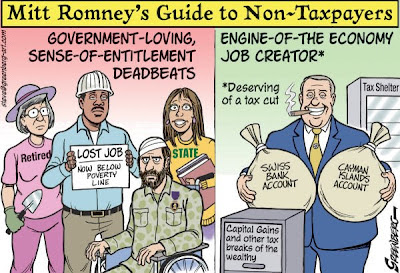 Mitt Romney must be shaking in his boots at the thought of having to debate Barack Obama. I would be and I'm a pretty smart cookie. I took on Cornell West and Tavis Smiley on CSPAN the other day and left both of them in silence with their jaws dropped open. I still don't know if I'd like to take on Barack Obama, even though I would love to give him a piece of my mind as well.

Poor Willard Romney. I suppose he really though he had the upper hand for a change. He jumped all over Barack Obama's comments about where change really has to come from.


I think that I’ve learned some lessons over the last four years, and the most important lesson I’ve learned is that you can’t change Washington from the inside. You can only change it from the outside. That’s how I got elected. And that’s how the big accomplishments like health care got done.


And Mitt's response to this:

Republicans have made no effort to be a part of that "We". If the Republicans cared about America as much as they hate President Obama, then "Yes We Can" would be a reality, not an unrealized dream caused by conservative obstruction.

Neither Candidate Obama nor President Obama ever claimed he could do it alone. Unlike Mitt Romney who really believes that he can be elected President by sharing as little of his agenda as possible unless it's an agenda of oppression.  To Mitt Romney, women, minorities, school teachers and anyone else who dares to be in a union - these people are the enemy.

But these people are the "We". The only thing Mitt Romney understands is "I".

This goes beyond mere semantics. As we learned from Romney's 47% statements, Romney not only doesn't care about the poor, he doesn't care about people who have to work for a living. He doesn't not understand that part of the "We," he only understands "I" and people who are exactly like him. Rich and believing that more money makes them somehow better and more knowledgeable about how to run this country.

All it really does it make them richer. Not better, not smarter and certainly not more capable.

This country should not take a chance that Mitt Romney can learn the difference between "We" and "I" between now and November. If he hasn't learned how to care for others more than himself by now, then he never will and anyone who can't care for all of us does not deserve to be our President.

Related Articles: Why NONE of the Republican Candidates Should Be President