Part I
My name is Deborah and I have uterine fibroids.

There I said it. Whew. That's a load off. I've been debating whether to say anything about it or just keep it to myself but then, I decided to blog about it so here goes.

This post is going to detail my issues with the female reproductive system. If you are in any way squeamish about this sort of things, I promise, you will NOT want to read this. You have been warned.

I have known that I have had uterine fibroids for a very long time. My first inkling that something was wrong was the Winter of 2002. I've always had heavy menstrual periods but this was decidedly abnormal. I went from the usual every hour or so tampon bit to tampons and pads. I couldn't keep up with the flow and eventually I moved to two tampons and a pad (I know, OMG, right?). But this seemed to keep things under relative control.

That's right. I did not immediately go to the doctor. I did not leave work. I went back to doing data entry as if nothing had happened. I cleaned up the bathroom and never said a word to anyone.

But I was frightened. Fortunately, this was the age of the internet. I Googled, this that and the other and found that other women were going through the same thing I was. The most certain bet seemed to be that I had uterine fibroids.

Looking back, I realize that diagnosing your health problems via Google is as smart as it is stupid. It's good way to get an idea of what might be wrong, but it's certainly should be only the beginning of what a person should do. But I took what I read online as gospel.

And then my periods stabilized to some degree. I'd have one month of a normal period and the next month would be a crazy bleeder. At the time I didn't know how my body worked this out, but now I think I do. From what I can feel (yes, I can now feel my fibroids), I'm pretty sure that one ovary has a monster of a uterine fibroid hanging over it. Ovaries take turns at ovulating each month. I think when I ovulate from the one without the fibroid, I have a (fairly) normal period. But when I ovulate from the one with the fibroid, my period, quite literally, would be a bloody mess.

And things went on like this for three years. One month good, one month bad. But the bad months started getting worse. At first my periods were of normal length with excessive bleeding. But then the bleeding started lasting longer. Like 2 weeks. Anyone who lives with me, knows that even in the best of times, my temper can be formidable. Me PMS-ing for two weeks a month made life with me unbearable.

I was also physically tired a lot. Fibroids cause pain and pressure, even when they're small. But they feed on blood and my body was giving them plenty. They only got larger and by the time I finally decided to see a doctor in June of 2004, my largest fibroid (I have more than one) was the size of the 4 month pregnancy.

Part II
Posted by ThatDeborahGirl at 8:07 AM No comments:

The moment I stopped supporting Hilary

Posted by ThatDeborahGirl at 8:04 AM 3 comments: 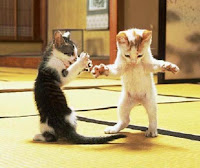 OK. It's been way too serious around here for way too long. I've been talking doom and gloom and politics and impeach Bush this and shove something up Cheney's that for a while now and why not follow up a post about Dr. King with a bit about this vaunted song Crank Dat by Souljah Boy.

This morning, for whatever reason, I was chanting the lyrics to this song under my breath as I went about my morning work. I never made a conscious effort to learn the song but it's played so incessantly I suppose I picked it up somewhere. It also comes with a dance, that is quite energetic, fun and which I learned how to do last summer when I took 5 girls to our church retreat. They played very strict radio edits of certain songs and this was one.

At the time, I didn't know the lyrics, but if you haven't heard it, it goes a little something like this:

And that's the cleanest part of the lyrics, so that's all I'm posting.

This morning, however, Teen Arabella walks up to me and asks, "Do you know what that song means?"

And I'm like, "No, I thought it was just the song and the dance."

And then my mother comes into the room and the conversation lags for a second. We exchange guilty kid glances and then at the same time we both say, "We'll talk about it in the car," and she runs off to finish gathering her things for school.

So in the car she starts to tell me what it means and she starts off in the cutest way.

"When a man and woman are having...well relations..."

And I burst out laughing. At that moment I made a decision.

"If I knew and you didn't, I could tell you, but I don't want to hear it from you.

"I don't even care that you know or that you discuss this kind of stuff with your friends - but I don't want to hear this from you."

My daughter and I have had some very frank discussions about sexuality. I've always been the kind of parent that feels if they're old enough to ask, they're old enough to get a truthful answer. But usually I've been on the explaining end, which, I think, is as it should be. This morning, I just could not hear this from my daughter.

At which point we decided I would look up the definitions of souljah boy and to be more specific superman dat at Urban Dictionary.

Which I did. And I burst out laughing all over again. But I'm glad my daughter wasn't the one to explain this to me.

The "music" our children listen to is deplorable. But honestly, it wasn't much better when I was a teen. The songs were a tad less blatant but the meaning was the same. I just can't work up my way up to righteous indignation over this.

You can listen to the song here and follow along with the lyrics here. You can also watch the souljah boy instructional video and dance being done here on YouTube.


******
My daughter turns 16 this year. That makes me feel old and young all at once. Old because, hell, where did the last 16 years of my life go? And young, because once she's in college, I'm going to have a lot of free time and I'll be a relatively young woman - I'm going to enjoy myself as much as I can.

The other day she mentioned getting her temps and I'm like, cool, because the sooner she can drive the better. She is in EVERYTHING at school and being her constant chauffeur sucks. There will be some very strict limitations on where she is allowed to go, but at least I won't have to leave the house every 15 seconds to take her somewhere or pick her up again.

She hasn't really asked, but I'd also like to give her a nice Sweet 16 Party. Nothing like those monstrous fests you see on TV of course - who the hell has money like that? Certainly not me. But even thought money is a little tight these days, I'd like to do this for her.

But I realized that since half our stuff is still in storage, I don't have access to her birth certificate, S.S. card, nothing. I couldn't get her temps if I wanted to. I could dig for everything through the storage but that could take hours or days even. It'll be easier, less stressful, and is going to take about the same amount of time to just to order new copies of everything.

It's weird though. Gathering up all these official little pieces of my daughter's life that I've guarded so carefully for so long that even I can't find them. And once I get them, I'll probably be handing them over to her soon. It's just one more step to her independence and her leaving home.

It's a bittersweet feeling.
Posted by ThatDeborahGirl at 8:30 AM 2 comments: