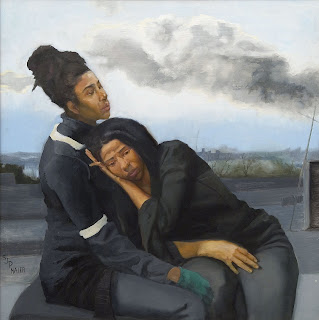 For Timothy Thomas and Roger Owensby and the other 13 who made the news only for the white media to prove their infamy not out of any sense of wrongdoing on the part of the police.

For the happy fat man who danced at White Castle. As a fat woman, I took this kind of personally, especially since I know I'm regarded as more "aggressive" because of my race and size. Not even a part of the number cited as "15 Black Men killed" yet he is gone.

And also for the the Naked Man. Again, not a part of the 15, but just as dead at the hands of Cincinnati Police.

And Amadou Diallo, truly an innocent man if there ever was one and yet the cops who shot him were found "not guilty".

And for all the black families in any ghetto, any suburb, any city USA where the lives of black men are cheapened and lost because even the most violent of white criminals will be assured that they will be brought in alive whereas a black man merely celebrating his upcoming wedding with his friends will be accused of having a gun and being shot to death whether it's true or not.

In solidarity with my people, I wear black today. Ye Olde Matey and I both got text messages from friends last night. Are you watching Rev. Wright on CNN? Don't forget to wear black for Sean Bell tomorrow. And so I am.

On another note...After the riots and the resulting police slow down and then the so called "Collaborative Agreement", it dawned on me that in order for "equality" to prevail in police treatment of citizens, the police would not have to terrorize black people less, but simply mistreat, brutalize and kill more white people for their behavior to be seen as standard operating procedure, not abnormal.

Lately I hear more and more stories from my white friends about small slights and ill treatment during routine stops by police. If you google "black man shot by police" you get millions of returns but simply google "man shot by police" (the media does not use quantifiers for white people unless absolutely necessary) and you will find a ton of entries that having nothing to do with black people

I fear for my white friends and neighbors. Whether you realize it or not, we're all in the same boat and it's sinking friends. It's sinking and we can only buoy it up again together.
Posted by ThatDeborahGirl at 9:48 AM No comments: Links to this post

The year we lost our baby, I also lost my main full time job, I lost my father and, in a precursor to the current foreclosure crisis, the house we were renting was lost by the owners to foreclosure.

We moved in with my mother, I went back to work at my second, and then only, part time job. Life went on.

This post is going to detail my issues with the female reproductive system. If you are in any way squeamish about this sort of things, I promise, you will NOT want to read this. You have been warned.

And for the next three years I would put up with the increasing worsening symptoms of uterine fibroids. I went on to several temporary jobs that were full time but included no health insurance. And finally, this past winter I found the holy grail. A full time job, great pay and that included health insurance.

And it wasn't to last. The residential foreclosure crisis also has had it's effect on commercial lending as well. The larger clients that my smaller company provided services for were no longer able to fund their projects. And my company announced that we were all being cut back to part time hours and even then only until June. In June, they would be closing for good.

I had made plans when I'd gotten this job. We would finally be able to use our savings and move. There were several houses for sale near my mother so we'd be close by. Once we moved, I'd take a bit of time and go ahead and deal with my fibroid issues.

But the American system of tying health insurance to jobs was about to fail me again. I had less than a month, and the shortest month of the year no less, to be re-examined, have my fibroids located and the UFE performed. I was determined that it was to be UFE. I simply could not bring myself to go through major surgery again.

I found a doctor through my insurance carrier's website. Actually I found several and I took the one who could get me the soonest appointment. Once I actually met the man, I told him what my problem was. He examined me briefly and told me what I already knew.

"Yep, you have fibroids." And then he proceeded to tell me about myomectomy and hysterectomy. He didn't mention UFE. Not once. Not at all.

I was very angry but at least this time I was aware of all my options. I stayed calm and told him that I wanted to have the UFE procedure. He shot a sideways glance a the medical student I'd given permission to hang out with him during the exam and then he said, grudgingly, "Well, if that's what you want, I'll give you a referral to the radiology department."

I explained my insurance constraints and he assured me that I would never be able to get any procedure scheduled that soon, but he gave me a direct number to a radiologist anyhow.

And that's what saved me. I went home and got on the phone. Two days later I spent forty-five minutes in an MRI machine, humming songs in my head to drown out the clanging. The following Monday, I met the radiologist who had ordered the MRI and came face to face with a 3-D picture of...well me, quite literally inside out. I saw the most amazing photos of my tail bone, ovaries, uterus and finally, the three fibroids that had been giving me hell for eight years, including the one that had caused the loss of my baby. We were immediate enemies on sight and still are.

He showed me what I was up against. The first fibroid, although smaller, at 2cm in diameter, I could feel through my skin. This was the one that caused all my discomfort sitting and lying down. It also sat directly atop my bladder and caused all the feelings of frequent urination whether I had to go or not. The second, although larger at 4cm I could not feel at all but it was the one likely causing constipation and my back pain. And a final tiny one that seemed benign but was probably the source of all the heavy bleeding I'd experienced.

Despite all this, Dr. Hanking concluded, I was a good candidate for UFE. There were only 3 fibroids, I hadn't developed any others and I'd lived with these for over 8 years. The MRI was well defined and showed them clearly.

And we scheduled the UFE for two days later.

Recovery
They said I would be up and around in one week maybe two. I had the procedure on February 27 and it was every day of March before I was truly back to myself. Full recovery can take 3-6 weeks but is still less invasive and involved than hysterectomy or myomectomy.

Day 1 - Immediately after the procedure
Major cramping. Bring me a morphine pump and some vicodin cramping and keep it coming type cramping. That line they give you about it being like "bad menstrual cramps" is exactly that - a line.

Day 2 - Severe cramping and nausea
I went home the day after the procedure. They actually prescribed me an anti-nausea pill which was very necessary or I wouldn't have been able to eat. I also had something akin to motion sickness and could not tolerate anyone bumping into my bed even slightly or I'd be ill.

Day 3 - 10
This had more to do with the twilight anesthesia I was given - the kind where you're out of it but still mostly awake. But afterwards I had a strong sensitivity to light, sound and smells. There was very little I could stand to eat or drink and anything remotely salty was sent away. Even a small light in my room had to be covered with a towel.

The anti-nausea pills were in frequent use and my family was happy when I was knocked out on vicodin and able to sleep. Still having cramps worthy of vicodin and spending more time asleep than awake. There was also some slight post-procedure bleeding.

By week 3
I was able to venture out of the house for short periods but I was still having all of the above symptoms and fatigue. My doctor was following up with me weekly to make sure I was weaning off the vicodin (no way) and to make sure I had a menstrual period.

UFE comes with it's own risk of causing infertility. Although the particles should only block the blood supply to the fibroids, there is also the possibility that they may find their way to the ovaries, blocking them, cause them to shut down, triggering menopause.

Living with this fear plagued me the entire time. I tried to tell myself that even if all the other symptoms were averted and infertility was the result, I'd be ok with that. But truth is, in the next couple of years, I would like to try and have another baby.

When a month had gone by with no sign of a menstrual period, they asked me to come in for a blood test to make sure my ovaries were still working. The day I was scheduled for the test my period started.

Final
The end result is, I'm fine. The fibroids are already shrinking. I have already lost weight, my belly is down and the fibroid that I could feel under my skin, well, it's still there, but I have to look for it now. Already, the immensely heavy bleeding of my periods is back to normal for the first time in eight years with a lot less cramping. And the same old emotional roller coaster - fatigue, depression, moodiness, loss of temper - some things never change.

That this was accomplished without major surgery or a loss of fertility is something I will be forever thankful for.

I've had a couple of people ask me, why I've bothered posting all this or why I'm telling this story. But thousands of women are effected by uterine fibroids. There are blogs and medical websites detailing the medical side of fibroids.

But it was the individual comments and stories of the women that finally convinced me that I should not ignore this problem any longer and also, what it would be like. If my story can help someone, anyone, then it was worth it. And from my referral logs, I can see that it already has. I've had several emails asking for the end of this story, which I'm glad to finally post here.

So, this is dedicated to all the women with fibroids. I hope this journal is helpful to you and I hope you'll find the best way to deal with this.

Part I
Part II
Part III
Posted by ThatDeborahGirl at 9:06 AM 6 comments: Links to this post