Did we really just support the President & Dems for reform only to wind up with a madatory health insurance law?

Americans without health care coverage in 2014 will be fined (with the exemption of the very poor). The Daily Illini


****
This is the one of the worst ideas ever. Why don't they just pass a law that all people are serfs. Anyone who makes between $20,000 and $100,00 a year must hand over half a quarter of their income to a car insurance company, another quarter to a health insurance company and another quarter to the government for taxes. And they can benevolently allows us to keep the third quarter to feed ourselves & our children.

If you make over $100,000 a year you give up half your income for car & health insurance but you don't have to pay taxes.

Anyone who makes less than $20,000 a dollar a year doesn't have to pay the government or health care portions but still has to pay car insurance.

Doesn't sound fair? Who cares? It's pretty much the system we just endorsed.

The TeaBaggers & such were right about the health care bill. It's stupid - but they were right for all the wrong reasons. And no one wants to listen to a bunch of racist idiots. Too bad they couldn't separate their racism from their message of smaller government & fair taxes. Because they couldn't get over themselves and their petty (yet dangerous) bigotry, the corporations are laughing all the way to the bank playing divide and conquer while lining the pockets of our politicians.

We're paying these people to abuse us and steal from us.

It's long past time for revolution. It's just that some white people are too gullible and are too afraid of this mythological race war that will never happen. They'd rather scapegoat minorities instead of believing that the people who are skinning them share their skin color. All of us need to be kicking each representative and senator in the shins until they cry uncle but it's much easier (somehow, don't ask me how) to blame minorities for the country's problems. It's a damned shame - and President Obama will be out the door once everyone, regardless of skin color, understands what this health care proposal really entails.

This is one "bipartisan" idea the President should have insisted on leaving out. Unfortunately, it's the one that's going to stick in everyone's minds come 2012. His supporters are going to think he was too weak to stand his ground against a trick like this (a burden to them) and his detractors are going to point it out as his idea (and a bad one) when it was really a Republican idea he accepted trying to keep them at the table when he should have booted them in the ass over a year ago.

It's a damned shame and it couldn't have happened to a nicer guy. Even so, the American people deserve better. We won't get it - not with the jerks the GOP is fielding as front runners - Palin & Romney - we may as well get ready for totalitarianism

It's an awful state of things but that's America right now. Love it or leave it.

I'm seriously thinking of doing the latter. Me & Rush Limbaugh.

Do I Really Mean What I Write?

Last night, I had a brief conversation with someone I really respect. I asked him to read my recent article entitled, "Steve Chabot is Full of Shit". He raised an eyebrow at the title, and I read a wealth of remonstration in that one gesture. It lead me to ask myself the question: Do I really mean what I said about Steve Chabot or am I just shooting my mouth off?

Now I've never met Steve Chabot. Never shaken the man's hand, never attended an event he's been at that I can recall, I'm pretty sure I've never actually seen the man in person - only on TV and online.

But Steve Chabot invited himself into my home by way of his Tele-Town Halls. I didn't sign up for it and neither did anyone else in my household. One day we got a phone call on our home line and, if I recall correctly, there's a recording introducing what the call is for, and then you're given the option to listen in or hang up. After a second, you hear Steve Chabot himself talking about the current issues of the day and what he, as a congressman, is trying to do about them and what his positions are.

During the very first phone call, listening to Steve Chabot state his positions had me biting my tongue to near about bleeding and, quite literally made me ill. I had to listen to some of the most intolerant, bigoted claptrap I've had to listen to in quite awhile. If I'm not mistaken this was around the time some idiot decided it would be a great idea to put a sign in the window of restaurant declaring his establishment to be English Only.

Well, Chabot and his conservative supporters all support English Only in Cincinnati and lest you think I'm joking, you can look here for Chabot's position supporting the now defunct (and bigoted) initiative to make English the "Official Language" of the United States.

This time around what I learned is that Section 8 is responsible for all the problems being experienced in Western Hills, Price Hill and Colerain - areas which local white folks are quickly writing off as "ghetto". Black people moving in, apparently, make an area ghetto.

What I learned from the most recent town hall is that Steve Chabot doesn't want to answer any tough questions - even in a roundabout fake diplomatic way. The way Steve Chabot deals with a tough question is to hang up on the person who asked it. The only calls he took were from, what I could hear, older conservatives who stroked his ego, reinforced his conservative talking points and told him what a good job he's doing.

But the simple questions I asked - which I would have settled for a false diplomacy had he allowed them to be asked, let alone answered. But that he was too cowardly to even let them be asked and then disconnected me from his public forum to boot...

Yeah, I'm gonna stick with my initial assessment of Chabot until he makes any move toward changing it. Right now, it's my ultimate satisfaction that if you do a Google search for "Chabot, Telephone Town Hall" my initial article is the second search return.


***
Posted by ThatDeborahGirl at 9:58 AM No comments: Links to this post

There is a strong disconnect between the American Corporate Media and the world the rest of live in which is based in reality.

What we call the Mainstream Media has taken a leaf from the FOX Network playbook.

Mitt "Who Let the Dogs Out" Romney, recently made a statement that makes the claim that ANYONE in America can go to an emergency room, get free care and not pay a thing.

"Look, it doesn't make a lot of sense for us to have millions and millions of people who have no health insurance and yet who can go to the emergency room and get entirely free care for which they have no responsibility, particularly if they are people who have sufficient means to pay their own way."

In Mitt Romney's world, there is no need to fight for single payer or a public option because in his mind, all anyone has to do is waltz into an emergency room and get the care they need and it's taken care of for free.

Now it's bad enough that this man is rich enough and willfully ignorant enough to be this disconnected from the American people. That he is taken seriously as a candidate for any sort of public office, let alone the White House is akin to taking Palin seriously. Romney is just as much fluff in a tougher white male package. He is the Gilderoy Lockhart of politicians - all smile, no substance.

So that's bad. What's worse? You will not find anyone in the Mainstream Media questioning Romney's wrong assertion that America already has free health care. If Yahoo & Google news aggregators are any indication of the mainstream "Official Narrative" on Romney is seriously contemplating a run in 2012, up to and including pushing what will probably be considered his "campaign book" and is the go to guy on the current health care debate. 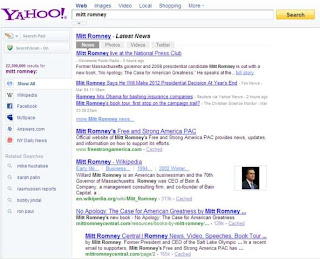 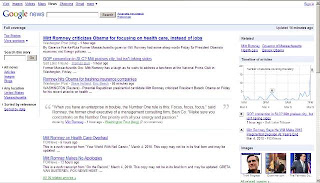 Only a few small and very liberal blogs will you find the narrative that the man who is considered a viable Republican candidate for the White House in 2012 is completely clueless about the very issue he "criticized" the President for focusing on.

This makes his idiot, clueless pandering to black folks during Romney's failed 2008 run for the Oval office - trying to find a way to fit in and "relate" during a photo op by saying "Who Let the Dogs Out?" almost look smart in comparison.

But the complicity of the mainstream media is disheartening and maddening all at once. Where is the narrative showing that Romney obviously doesn't know his ass from his elbow when it comes to what the American health care system is truly like? Let alone is he qualified to take the current President to task about it.

(Side note: I know how to spell "Romney" but obviously my typing skills are a bit off today.)
***
Posted by ThatDeborahGirl at 7:02 PM No comments: Links to this post

"No one ever went broke underestimating the intelligence of the American Public."
-Henry Mencken

America loves low-brow middle of the road humor as evidenced by Jay Leno's high ratings upon his return and the fact that America's Funnies Home Videos is still on the air. That America also loves Sarah Palin and seems hell-bent on making her a White House hopeful is, at best frightening, and at worst, indicative that the American public may be suffering from brain damage in larger numbers than anyone ever dreamed possible.

I do not understand anyone's fascination with the ever-vapid Sarah Palin. How she ever became governor of a state is a testament to the power of white privilege and being considered pretty. That she ever became a vice-presidential candidate and, God forbid, a contender for the White House is proof that the dumbing down of America is near completion.

If she runs, she choose Leno as her running mate. I'm sure they'd sweep the nation. Between his contempt for middle-class America and her folksy dimwitted charm, I can only promise that I, and many like me, would make good on our previous campaign promises and move to Canada.
Posted by ThatDeborahGirl at 6:10 PM No comments: Links to this post