I've been a fan of Downton Abbey for quite sometime and I had been missing this show terribly. PBS only shows the occasional rerun after having Downton in heavy rotation for months at the start of the year. Yesterday, I decided to spend part of a lazy Saturday watching some episodes from last season online.

I went to the page and simply clicked on the first link from the last season available. The minute I saw the opening I realized what I had done. I had stumbled across the newest "series". The newest season/series is already playing in the UK but won't be available in the US until January unless you watch online.

I said I would only watch one. Then two. But like a child gobbling down too many sweets when mum isn't looking, I clicked on that third link and my night, I think my life, was forever changed.


In Series 4, Episode 3, a much beloved character, Lady's Maid Anna Bates is raped. Violently, terribly raped. Punched, slapped, beaten, dragged screaming into a room off the kitchens and raped by the valet of guest at Downton. Made worse because, in Alfred Hitchcock Fashion, beyond the initial brutal punch and seeing her being dragged off, that's all that's shown. The rest is only heard in screams and slaps, interspersed with clips of everyone else oblivious upstair listening to a famous singer.

To say that I was shocked and appalled is an understatement of the greatest measure. In a series where I am prone to squeals, giggles and belly laughs over the Dowagers one liners and Cora's incessantly lovely head shaking. Where I'm given to sympathy and sometimes tears over every character's least struggle and disappointment. Where for three years I've breathed this show in like the scent of a lovely flower and was looking forward to many more. One of my favorite people on this show was raped.

I'm not sure I can watch this show again now.

When I first saw this, I sat stunned, alone, in the dark of my bedroom. So I turned to the one source I thought could assuage my grief that was building by the second. I went to Google and typed in two words:

In a world with thousands of woman name "Anna" and where "rape" is a horrible, but not uncommon word, that's really all Google needed to know to give me a digital pat on the back and steer me to the correct pages. Fans in the UK were angered, shocked, much as I had been on watching The Peter and The Bull episode of Family Guy which depicts a brutal rape that, even in a cartoon, left me ambushed and sickened. I have never watched Family Guy since. If it comes on, I change the channel.

I don't know if I can do the same with Downton Abbey but I may have no choice. I never thought there would be a need to stop watching this show, but, especially coming after the deaths Lady Sybill and later Matthew Crowley, this was one violent act gone too far.

I initially felt that the fans were over-reacting. I felt this episode was akin to an All in the Family episode where Edith Bunker was raped. I felt Downton Abbey had been shocking but I didn't think the episode went to far, especially in an age where brutal, gorey murder and the resulting autopsies are a nightly television staple and Law and Order SVU has shown much worse. It never dawned on me until just now that Edith managed to escape her attacker.

I couldn't sleep. So I did what any fan would do. I watched the next two episodes available. In an effort to understand and perhaps to put off going to sleep. I was definitely more disturbed than I realized. The aftermath of Anna's rape featured prominently in the two subsequent episodes.

And I dreamed I was raped. In living color. Violently, terribly, fully, no reprieve from any detail, raped in my dream. I spent hours in my dream trying to flee my attacker, living out the life of woman who has just been raped. The confusion, the terror, the physical pain from every scrape on my skin to bodily fluids down my leg.

I cannot describe the hideousness of this. The palpable relief of waking up and finding myself safe in my bed. The terror of realizing that even in my own bed, I wasn't safe. My bed is now the place where I've witnessed two rapes take palce. Anna's and mine.

I could not go back to sleep.

I cannot watch Downton again. I simply cannot "go back" to that house.

I've been robbed of so much and I just wanted to watch a show I liked.

I don't know what to do.


Update
Posting this, editing it and adding the links I've calmed down and stopped crying. But I have no idea what to do. I think I'm going to have to talk to someone.

I think I'm going to have to stop watching Downton Abbey for a long while.

I feel entirely stupid for letting a television show effect me this much. Then again, my past is not exactly free from this type of assault.

Update 8Nov2013
I'm not the only person who feels this way. Also, I am going to a few sessions of counseling over this. I won't be watching Downton Abbey for a good long while into the future, if ever.
Posted by ThatDeborahGirl at 11:29 AM 2 comments:

Caring for America is Weakness

The Republican Party has proved one thing: they do not care about the American people except as talking points and pawns to maintain their own power.

John Boehner has proven to be the most surprising person in all of this. He may not care one whit about poor people, but he has the typical sociopath's caring of his America. He cares about what he feels is right about his America. And in John Boehner's America, America keeps her promises and pays her bills. You don't promise to do a thing and then not do it.

It's interesting to watch and it gives me a grudging and tenuous feeling of gratitude (I can't call it respect) for John Boehner. In a world where his fellow party members seem only to stand for something, he is standing up for the one principle he believes in.

It's the one campaign promise he intends to keep. Like John Boehner, Barack Obama believes in keeping promises. You don't promise and thing and then not do it without a darned good reason and giving it everything you got.

But to every other Republican and far too many Democrats, actually caring about America, the promises we make and the people who reside here and are affected the world over by American policies - to care is weakness.

To not engage in mere political theater and protect your own interest is downright stupid.  To actually try to keep a campaign promise, uphold your principles or do something that works for the American people is something that only happens by accident or as a result of some cosmic screw up that results in a politician trying to scrape egg off their face.

If this sounds bitter and cynical it's because I am bitter and cynical. President Obama was right - they have lost the trust of the American people - and it's going to take more than another ridiculously partisan show of genitals and poop throwing before we believe that you have our best interest at heart.


Posted by ThatDeborahGirl at 9:47 AM No comments:

Put Up or Shut Up - Voter Rights Edition 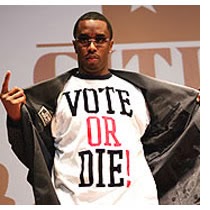 Damn, so on da Buzz today, they were talking about people, namely Tea Party types, signing up to be poll observers for the express purpose of challenging black voters on election day.

I suggested that the host, Lincoln Ware, who is politically minded, should start a "Who Watches the Watchers Program" to keep an eye on these types of shenanigans. And he said, 'Why I gotta do it, why can't you do it?" And I'm like, "Nobody knows who Deborah is, who's gonna listen to me." I mean seriously, I have a blog, but like five people read it.

Does anybody want to sign up to be a poll observer? If I can get 25 people to sign up, we'll start a group to become poll observers and make sure black voters or any voters are not subject to intimidation and discrimination or harassment.

I'll get the information on how to become poll observers and where we should deploy our volunteers. We will also need an action plan on how to respond if we do witness intimidation.

Geesh. Anyhow, it's time for me to put up or shut up. I have to at least try.

I'd also like to to thank those who send readers my way:

Posted by ThatDeborahGirl at 2:44 PM No comments: