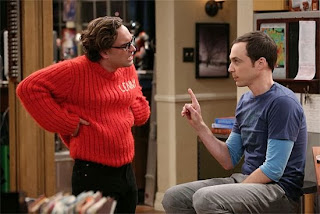 My deepest loves I rarely blog about, but the latest episode of "The Big Bang Theory" made a very deep impression on me. I'm going to be thinking about this episode for a long time to come.

I'm just going to jump right in and say that I've waited a long time for the return of adult Sheldon. For far too long we've had to deal with petulant, childish, Bazinga-yelling Sheldon.

But in "The Itchy Brain Simulation", even Sheldon seems to be looking back on these past shades of himself and finding them lacking. His adult behavior in this episode is nearly out of character until her reminds Amy and the rest of us: "I don't know why you're surprised. I am a grown man."

And with that we've finally come back to the adult Sheldon. The Sheldon who saved Leonard from death, an international spy and The Department of Homeland Security. The Sheldon who briefly peeks through in another epidsode and wonders why he is "punished" with social conventions even long after he saved a nun's life. The Sheldon who has made several significant scientific discoveries throughout his career and recently spawned an international collaboration to verify his discovery.

Oh, that Sheldon. Adult Sheldon. It's nice to see him and yes, we had almost forgotten and it's nice to see the writers have remembered Sheldon is an adult like he was in the beginning of the series

Now I see the shift and dichotomy of Sheldon more deeply. Part of the episode revolves around Sheldon trying to pull off obvious and childish pranks. Much like Sheldon trying to fit into the workaday world of his inner circle, they don't quite work as much as he would like them to. But they do provide him with easy experiments to social situations - what works, what doesn't - things that we understand (hopefully) but Sheldon is still working on.

But while all these daily machinations and interactions are taking place, we see that Sheldon is playing a much longer game than any of the other characters. The beautiful mind of Sheldon Cooper that we've been hearing about so long, shows up in this episode with a vengeance.

If all the other seasons have been about bringing all these characters together and delving into their various relationships, this season seems to be about breaking down those parts into their original elements - splitting the atoms as it were - and finding the deeper aspects of what these characters are truly made of.

This season has gone a long way in a few episodes of answering the question we've all wanted to know: Why is Sheldon the way Sheldon is? This is the third time we've been made aware that Sheldon is more than the sum of his geeky parts and that he is more aware of himself.

And for the first time, Sheldon is trying to tell us in ways that are adult, insightful, reasonable and downright interesting.

I see now that this actually began last season with Sheldon explaining - patiently and candidly - about his issues with physical intimacy.

This season, when he confronts Penny over disregarding his feelings over the seemingly trivial YouTube comment system was, for Sheldon, akin to anyone else revealing their deepest heart's desire on an entire episode of Dr. Phil. He demands that his feelings not be written off, and given the same consideration even if the others don't quite understand.

And then there's this episode which will probably go down in history as one of the top episodes in the series from way back to the first time Sheldon hugs Penny all the way up the Bakersfield Expedition.

This time Sheldon literally puts Leonard in the position of being Sheldon.

I found this to be mind-blowingly insightful (sorry if I've pre-blown your mind) and, as Amy puts it, "diabolical". It's a reminder of the Sheldon who's such a formidable opponent that even the Department of Homeland Security leaves it to his mother to deal with him.

We saw in an earlier episode this season that Leonard has great empathy for Sheldon. And even though the long-suffering Leonard puts up with Sheldon far more than any of the other characters, I  still think this was a lesson Leonard needed to learn - that putting up with Sheldon may actually be a lot easier than having to be Sheldon.
Posted by ThatDeborahGirl at 12:36 AM No comments: Links to this post