A family will be without their son for Thanksgiving due to a "hazing incident" which is college speak for we let some other beat the crap out of your kid until he died.

I went to Jackson State University and, unlike at some white schools where student in band are considered geeks, in black schools, being in the band is a place of honor and the drum majors are campus gods. To have marched with the Sonic Boom still gives me props in a few places and, to this day, my closest friends from college are those I spent my freshman year with more than 20 years ago.

We were hazed. We had to do stupid things. We were worked hard and long hours. Up at 4am and didn't get to bed until well after 10 pm. Learning to march, practicing the more complicated music that put my high school sheet music to shame.

We were hazed. Most of it was psychological. Never did anyone hit me. Never did anyone deny me water or food or make me do anything more embarassing than chanting in line with a bunch of other people, doing pushups, silly pranks.

We also knew that our band directors kept an eye on things and never let things get out of hand.

The experience I had was tough but fair and fun. When I hear about people taking hazing incidents to the level of violence or forced drinking or dangerous pranks that end up costing someone their life, I get angry. How do we let this happen to our children again and again? And make no mistake, this a hazardous issue that crosses color and class lines.

I know they are young. I know they are foolish. But there is simply no excuse for taking hazing this far. In the realm of sensless deaths, this is as sensless as it gets: Death as the result of someone else's fun and sport.

Dear God: Give solace to the family of this young man.
Posted by ThatDeborahGirl at 7:49 AM No comments:

We deserve whatever we get when we do not support the voices of dissent. 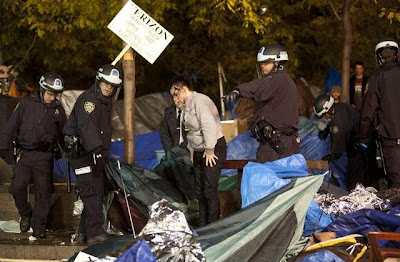 Posted by ThatDeborahGirl at 9:41 AM 2 comments:

Giving Credit Where Credit is Due

The disconnect between the media and the people - and also the people and politicians - has never been so plain.

He took his message to local cable access TV. Not a message of how he should be on council. A message that explained how Cincinnati seems to ends up with Council members they really don't want. His "vote for less than 9" message drew a few raised eyebrows. His cable mini-rants about 3CDC and our cities water, illustrated mainly by a whiteboard and Smitherman holding up a bowl of water...

But it turns out a lot more people were listening and paying attention than anyone thought possible. We are a nation of channel flippers and Smitherman played the odds. Discussions with a few people I know went from, "Did you see Smitherman last night?" to my actually getting phone calls when he was on. "Girl....he's on tv again...is he crazy?"

Crazy like a fox it seems. He got the exposure he needed, but he also made a lot of sense. He may have seemed a little strident and impassioned about his topic...but it made people pay attention. And the local media's insinuations, even my boy Dean over at the Cincinnati Beacon, that Smitherman was just nuts, couldn't really hold up to the reality that what he was saying had merit.

The result is that Smitherman's "vote less than 9" message woke Cincinnati up did the city a big favor - He got Leslie Ghiz and Chris Bortz off Council, and honestly, this blogger couldn't be happier. Smitherman has changed Cincinnati History. For the first time, in a city that is becoming increasingly Black due to white flight, Cincinnati has a Black majority on City Council

And every local headline and local news show is proclaiming "The Big Shakeup" and how amazed they are they Bortz and Ghiz, along with the patently ineffective go-alongs Lippert and Murray, were given the boot. They media is bewildered and just can't imagine "how this happened". They can't help but point out that the council is now a majority "African American". Oh laws a mercy.

Not a single one of them will bother to mention what everyone in Cincinnati knows, and what Lincoln Ware is already crowing about on the WDBZ (Da Buzz 1230 AM). That the local media will not acknowledge what "everyone" already knows to be true is disheartening and honestly, makes me sick. That they can sit there, much like their 24/7 big network counterparts, and grin at everybody every day, 3 times a day, and not be honest or just plain create lies of omission is something that somebody needs to point out. So I am.


We are Ohio
The unsung heroes of "We Are Ohio"... just wow. They really did the damned thing. These comments really say it best:

*****
“From the day we were locked out of the statehouse to the day we turned in 1.3 million signatures, we have felt the support of Ohioans. Tonight we thank you and all Ohio voters for your historic and overwhelming support of collective bargaining rights for Ohio’s everyday heroes.” - We Are Ohio statement

But this entire nation owes We Are Ohio a big thank you. People from all across this state pulled together. Before #Occupy was thought of, these folks camped out at the statehouse and when they were turned away went on to deliver a message to the likes of John Kasich, Scott Walker and Rick Scott.

And that is true. The local "We are Ohio" group cheering on Issue 2's defeat and partying downtown at "The Holy Grail" were a happy and diverse bunch as far as Cincinnti goes which means mostly white with enough black folks thrown in that you could notice they were there and not have to search for them.

People were mingling, talking, cheering every time Issue 2 was mentioned on a tv screen. The overall mood was celebratory but you could already see the wheels spinning. There was a slightly subdued feeling born of victory but also of anticipation...What can we do next?

He's only just begun.
Posted by ThatDeborahGirl at 5:44 AM 1 comment: