If you don't read anything else about the Obama/ McCain debate, you have to read this.
Posted by ThatDeborahGirl at 11:35 PM 1 comment:

Do you have spare $750 billion dollars lying around?

How about the minimum of $5 million John McCain thought (until someone told him he was an idiot) that you need to be "middle class".

I am so disgusted with our media cheerleading the taxpayer entire bailout of this desperate financial crisis. The MSM's job in all this: to make sure we know that everyone in charge just needs their hands spanked: Congress, the White House and and well, maybe yes, the top folks at the Federal Treasury and finally the elites of Wall Street.

The words I hear bandied about: misjudged, stretched the truth, mismanaged, over-speculated

Words I don't hear: knew but lied, knew but lied, knew but stole money, knew they were over-reaching, over spending and just plain defrauding American consumers en masse - knowing from the past history of the Savings and Loan scandal that they could pin the entire price tag on us and we would roll over and take it up the wazooo.

I don't have spare $750 million dollars but I bet those Wall Street Executives do. I bet George Bush and Dick Cheney do, as much as they've benefited from the War through Haliburton and again from the rape of the American people in gas/ oil money. I bet Condolezza Rice does - just because they scrubbed her name off the oil tanker doesn't mean she isn't still filthy rich. John McCain - hell, with 7 houses, he might be able to scrape some gilded gold leaf off one of his many chandaliers, hit a pawn shop and come up with half. Hell what Barack, McCain and all the other candidates have spent on this election alone just maybe could have prevented some of these new tent cities from springing up.

Why are the rich elites in this country so eager to pick our pocket but NONE of them are willing to step up to the plate and plug this sinking hole of an economy?

And how have we benefited.

We're paying for our own loss of civil liberties.
We're funding the deaths and imprisonment of our own citizens.
We're allowing the wars to continue.
We're allowing Wall Street to pin the price tag of their greed on us.
We have allowed the last 8 years of Republican administration to lie us and cow us into submission.

I say no more!
They don't run us or lead. They simply administrate us! And they have done a lousy damn job. Every single one of them.

No more!
We need to rescind the privileges of every single Congressperson and Senator.
We need to re-evaluate exactly how our Supreme Court is chosen
We need to try George Bush (Jr. & Sr.), Dick Cheney, Wolfowitz, Rumsfeld, Rice, and Rove for treason.
We need to turn our federal government upside down and shake it until they do right by the American people.

Our government is a failure. Only revolution and a new way of doing things is in order. Actually the old way of doing things - abiding by our constitution and installing TRUE guardians of liberty to public office. We the American people are far too willing to bury our heads in the sand and let "the government" do the dirty work.

The problem is, WE ARE THE GOVERNMENT. The People. And if we fail, then our government fails. And it has failed miserably.

If you plan on voting for McCain you're an idiot. How can you think more of this type of government or lack of it is a good thing? How can you vote for a man who thinks that if you don't have $5 million dollars you're no better than a poor homeless person?

I am mad as hell and if you're not outraged then you should be.
Don't let them pin the Wall Street bail out on us.
It's time to march.
It's time to fight.

Our goverment is not only lying to us they are robbing us blind!

Let the next American revolution begin!
Posted by ThatDeborahGirl at 7:13 AM 1 comment:

FYI: Death and Destruction Continue despite Election and US Media Ignorance

Smoke billows outside the US embassy in Sana yesterday after a car bomb set off a series of explosions outside the heavily fortified embassy in Yemen. Photo and caption from the newspaper Times of Malta 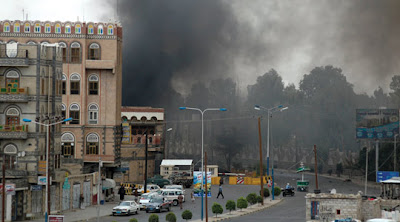 The US Embassy is under attack in Yemen.
What have we done to piss off Yemen?
Ah, it's Al Queda again.
Another day
Another terrorist

While we dither over Obama/Biden, McCain/ Palin
Come on, is this really a choice for some of you people?
Please wake the hell up already.

Even so, while we focus on inconsequentials
The sons and daughters of our great nation
Die

So that our Emperor can fiddle while Babylon burns

Seven more soldiers dead in Iraq
How many Iraqi's will be killed in retribution for their deaths?
Talk about a zero sum game.

I am not whining
These problems
These deaths
Are real

I am angry
I am saddened
I am crying

Back to your regularly scheduled life.
Posted by ThatDeborahGirl at 11:28 AM No comments:

I didn't write it but I swear I should have and would have and it echoes my sentiments perfectly - especially as the mother of a 16-year-old daughter with a boyfriend....

And that's all I will ever have to say about John McCain's lousy choice of running mate. Truly, it's all that ever needed to be said. That and all they pithy stuff The Skeptik One is testifying to over at her place. It warms the cockles of my heart, truly it does.

I apologize for this interruption in my regularly scheduled support of Obama. Might I suggest a Palin blackout? Just ignore the heifer. She's really not worth the press.

P.S. I'm still pissed at Obama about his FISA vote. Not pissed at him enough to not vote for him or switch my vote to McCain. That will NEVER happen. Just FYI.
Posted by ThatDeborahGirl at 7:42 AM 2 comments:

The Truth Shall Set You Free

Posted by ThatDeborahGirl at 9:43 PM No comments: