OccupyCincinnati Under Attack: The rich rule us all 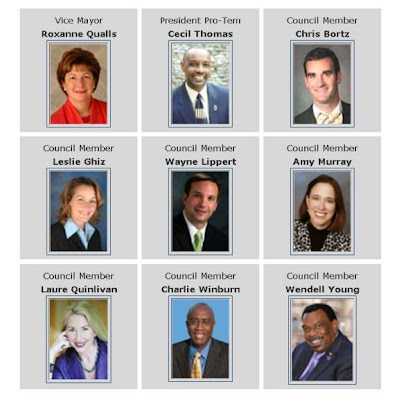 In less than 9 days, Cincinnati Police Chief James Craig went from stating publicly that Cincinnati Policer were not to arrest Occupy Cincinnati Protestors to saying 'they could possibly be arrested' to the protestors being arrested this morning and their tents thrown away by city workers.

So either the police chief said one thing publicly and another privately - or City Council rules Cincinnato for the wealthy white citizens of Cincinnati only. If you are poor or middle class and live in a neighboorhood that doesn't count with them (you know, the kind that have blacks and Latinos living there) the people of that neighborhood don't count.

Thanks Cincinnati City Council. You all suck.


It is a fact that 3CDC is the corporate arm of Cincinnati City Council. They do the dirty work that Cincinnati City Council officially can't do. They now own Fountain Square, although they will tell you that the people still own Fountain Square (we don't) and that they merely "administrate it". However the fact that you have to get permission and permits from 3CDC to hold an event there, makes them a defacto owner and public entity.

Piatt Park, like many others, is "administrated" by the Cincinnati Park Board, supposedly on behalf of the people of Cincinnati. However just like every other government entity from Congress on down, what starts out as, "we will take care of the administrative work of maintaining a park," turns into a mini-dicatatorship over a piece of land. They tell you who can be there, when they can be there and what you can and cannot do when you get there."

And the Occupy Cincinnati Protestors moved their protest from the obscure outskirts of Lytle Park to Piatt Park - which only makes sense - what's a protest if it can't be seen?

These young white kids found out fast that CPD does not give a fuck about them. Being white is no longer enough protection to keep you from getting arrested in this city or in this country. If you stand with the poor, middle class or minorities, expect to get treated with the same disrespect - expect to be treated, at best, like a second class citizen and at worst, a criminal.

I wholeheartedly support Occupy Cincinnati and the OccupyTogether movement. I think Cincinnati, as much or more than anywhere else, needs this movement. Cincinnati is purposefully segregated and the rich are aligned against the poor to the point where any space that is Occupied by the poor is currently under renovation by 3cDC and they are pushed out.

I wish I could drop my life and go protest with them. Even in the cold and rain. I have a mother with MS and an internship that will probably let me go any day now. If and when that happens, Occupy Cincinnati will have another protestor. In the meantime, I will go join the march today at 2 and see if there is anything I can donate to their cause.

Oh - and a special note to Roxanne Qualls. Shut up already. Or just get on the Bortz/ Ghiz train and support your own upper class already. But no one needs your platitudes about oh how sad it is the protestors got arrested while saying nothing else could be done. It's just the law.

All of you on City Council make me sick and I despise all of you today more than ever before. You are all a bunch of spineless cowards who have no business on Council whatsoever. You've proven, by allowing the OccupyCincinnati protestors to be arrested, that you have no interest in anyone who would speak up for the the leaset of those in the city you claim to serve.

You disgust me and when you look in the mirror, you all should be ashamed.
Posted by ThatDeborahGirl at 7:10 AM 8 comments:

PLEASE CIRCULATE WIDELY: If you are arrested at an Occupy Event, call the National Lawyers Guild:

Be very sure to write the applicable phone number in PERMANENT marker somewhere concealed on your body, protected from the elements. Do NOT assume you will be able to retrieve the number from a phone or a notebook. It is very likely you will be stripped of all your belongings.

Economic justice for all - to not be oppressed by a wealthy 1% who's wealth surpasses that of the rest of the 99% of us collectively. That means that 1% of people own more than all the rest of the people in this country put together. Everything we own. All of us.

They have taken our houses through an illegal foreclosure process, despite not having the original mortgage.

They have taken bailouts from taxpayers with impunity, and continue to give Executives exorbitant bonuses.

They have perpetuated inequality and discrimination in the workplace based on age, the color of one's skin, sex, gender identity and sexual orientation.

They have poisoned the food supply through negligence, and undermined the farming system through monopolization.

They have profited off of the torture, confinement, and cruel treatment of countless nonhuman animals, and actively hide these practices.

They have continuously sought to strip employees of the right to negotiate for better pay and safer working conditions.

They have held students hostage with tens of thousands of dollars of debt on education, which is itself a human right.

They have consistently outsourced labor and used that outsourcing as leverage to cut workers’ healthcare and pay.

They have influenced the courts to achieve the same rights as people, with none of the culpability or responsibility.

They have spent millions of dollars on legal teams that look for ways to get them out of contracts in regards to health insurance.

They have used the military and police force to prevent freedom of the press.

They have deliberately declined to recall faulty products endangering lives in pursuit of profit.

They determine economic policy, despite the catastrophic failures their policies have produced and continue to produce.

They have donated large sums of money to politicians supposed to be regulating them.

They continue to block alternate forms of energy to keep us dependent on oil.

They continue to block generic forms of medicine that could save people’s lives in order to protect investments that have already turned a substantive profit.

They have purposely covered up oil spills, accidents, faulty bookkeeping, and inactive ingredients in pursuit of profit.

They purposefully keep people misinformed and fearful through their control of the media.

They have accepted private contracts to murder prisoners even when presented with serious doubts about their guilt.

They have perpetuated colonialism at home and abroad.

They have participated in the torture and murder of innocent civilians overseas.

They continue to create weapons of mass destruction in order to receive government contracts. *

To the people of the world,

We, the New York City General Assembly occupying Wall Street in Liberty Square, urge you to assert your power.

Exercise your right to peaceably assemble; occupy public space; create a process to address the problems we face, and generate solutions accessible to everyone.

To all communities that take action and form groups in the spirit of direct democracy, we offer support, documentation, and all of the resources at our disposal.

Join us and make your voices heard!

*These grievances are not all-inclusive.

Posted by ThatDeborahGirl at 11:26 PM No comments:

By now you should have heard of Occupy Wall Street - it's only the biggest populist peaceful uprising to take place in America in decades.

And the rest of the country is taking notice. So now there's Occupy Boston, Occupy Seattle, Occupy Chicago....you get the idea.

And you best believe the establishement is fighting back and fighting dirty.

That hasn't stopped some folks from organizing Occupy Cincinnati.

I promised myself that I wouldn't take part in any protests until I officially graduated with my Associates Degree. I'm breaking that promise for this protest. I'm taking my neighbor's borrowed tent, my sleeping bag and some supplies and I'm going to camp out with occupy Cincinnati this weekend.

And if we get arrested...damn. Just damn. But oh well. Sometimes you just gotta do what you gotta do.

And what the hell have I been blogging for six years for if I can't even put my money where my mouth is?

So this post will be for updates on what's happening with Occupy Cincinnati.

Here are some links:

Occupy Cincinnati on Twitter
Posted by ThatDeborahGirl at 6:06 PM No comments:

Hey. Last year I threw a party and no one came. So, here I go again.

There is a scavenger hunt on this blog. Find the original hunt (Hint: it's an "annual" scavenger hunt now). Follow the rules. Send the answers via the blog. Any questions - ask me here.

If you won last year, sorry, you're not eligible this year.
Winners will be announced after November 1, 2011.
Posted by ThatDeborahGirl at 8:58 PM No comments:

I, like so many others, aboslutely posifuckingtively hate the new Yahoo mail. Worst, I hate being denied access to my mail until I click their fucking upgrade button. And even worse I hate Gmail.

It's not about hating change. I embrace change, I embrace tech. But Yahoo's mail went from having a clean, functional stellar interface to being ad-ridden, clunky, slow, hideous tabbed email (again WTF) clustefuck of fucktivity.

Did I mention that I hate Yahoo's new fucking mail so much that I damn near damaged my laptop in hatred. If Yahoo had a building anywhere near me I would be fucking picketing in front of it.

Yahoo, you simply fucking suck and as soon as humanly possible I will migrate everything off your punk ass servers and never use your search, never click on your ads, never be bothered with anything that has to do with Yahoo again.

Fuck you Yahoo.
Posted by ThatDeborahGirl at 6:11 PM No comments: