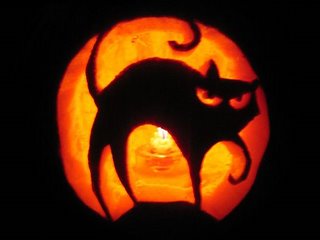 It was a year ago at the beginning of October, I joined the general blog explosion of 2005. It seems that anyone who didn't already have a blog got one last year, including me.

Sometimes news, political and current events can seem so far away or they don't seem to touch our own lives. I thought I would have to travel far and wide, well at least across my city, and interview tons of people to get decent posts. However the best stories I published here - the ones that were most pertinent to current issues and hot debates were literally right outside my front door.

I only had to open my eyes to my neighborhood and the folks around me to find my favorite sports hero, mistrust of the police, denial of birth control, politics, biometrics - not bad for year one.

Ya'll come back now, ya here.
Posted by ThatDeborahGirl at 5:36 AM No comments: Links to this post 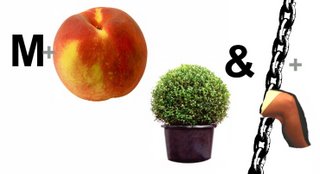 Tuesday, while I was blogging about pop culture idiocy with a side of bigotry, what is already the ghost of our Democratic Republic took yet another, and possibly the final step toward dictatorship when George Bush signed into law what is being commonly called “Torture Legislation” and formally as the "Military Commissions Act of 2006"

"The president can now -- with the approval of Congress -- indefinitely hold people without charge, take away protections against horrific abuse, put people on trial on hearsay evidence, authorize trials that can sentence people to death based on testimony literally beaten out of witnesses," ACLU executive director Anthony Romero said in a statement.

We’ve become accustomed to thinking that whatever laws and statutes George W. Bush signs into law, from the old school Patriot Act to this new school “Torture Legislation”, that these laws only apply to “terrorists” and that we must have all these new laws to capture and kill the bad guys.

We are no longer a nation fighting the good fight for freedom, democracy, peace and end to poverty. We are a nation of people who are turning a blind eye to our government while destroy the very foundations of American Liberty for the sole purpose of keeping power, money and global resources in the hands of a privileged few. What's more we are allowing our government for the first time ever to sanction detention without trial, torture and even murder with the blessing of Congress and by association, the American People.

I no longer have faith in our government or the election process. I never wanted George Bush to be president and he and the GOP have run America into the ground while lining their own pockets.

Millions are suffering in America and across the globe. Thousands have been mercilessly slaughtered in Iraq. Our troops are still fighting and dying a needless and shameful war while America actually interferes with the peace process. The Republicans explain and explain that it’s all for our own good to protect us from the terrorists. They swear up and down on a stack of bibles that if it weren’t for them, the terrorists would have attacked us again and what’s more, we’d have war here, on our own soil. We’re killing thousands overseas so we don’t have to face war at home, remember?

We must return to being a nation that has nothing to fear but fear itself. We must again, learn how to speak softly and carry a big stick. We must learn anew the language of diplomacy and understanding.

Because never has America been so clueless while the outlook was so bleak. If George Bush can suspend the right of habeas corpus because we are at war (I know Lincoln did it to and it was wrong then and it's just as wrong now), then what if he determines that we don't need a 2008 election because the country is at war and America can't afford to fight the war without him at the helm?

No, before that happens, George Bush, Dick Cheney and the entire line of succession down past Dennis Hastert must be impeached. Hastert, thank god, may be taken down by his knowledge of the Foley scandal, but the rest must be removed from office as soon as humanly possible.

If you plan on voting for any Republican candidates this fall, in the name of God, why?

These are the scum sucking, cowardly Senators who voted for this atrocity and don't deserve the office they hold.


The following Senators are the last of the patriots left in the Senate who voted against this: 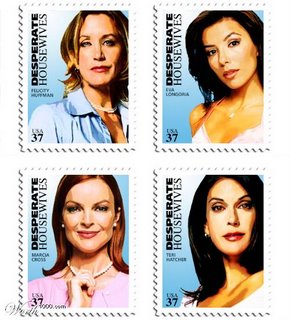 First they did an awful job with Alfre Woodard’s story line. Mrs. Applewhite spent several weeks simply listening to the thumping in her basement before even I finally figured out that the DH writers had no idea what to do with a black family in white suburbia. I also thought that the writers had probably gotten a clue as things seemed to heat up for the Applewhites and they did more than eat dinner while ignoring the loud noise in their basement; I thought maybe they would eventually find their niche on Wisteria Lane.

However the DH writers failed miserably. By moving in the Applewhites to Wisteria Lane, they were well aware of the lack of color on Wisteria Lane. Not so unusual, even in this day and age, however at least they were going to give integration a try.

However it soon became apparent that the folks at DH didn’t know much about black people, black family life or how black folks manage to fit into white suburban neighborhoods and it certainly isn’t by being mysterious and having loud thumping noises coming from your house. Eventually they fell back to playing on white folks stereotypical worst fears. A “large black male” -mentally disabled of course (didn’t see any mental-health professionals up at arms over this portrayal)- locked in a basement, being hidden away because he was an accused rapist and murderer.

Even I nearly missed the forest of stereotyping waiting and hoping for storyline trees to take root and actually develop. However the Applewhites never really developed beyond “Whoa. See those mysterious black people…hmmm…must be something wrong with them” for a storyline. Of course the black guy did actually go on a rampage and hurt a young white girl (shocking!) and before you can say “U-Haul," they were moving out, never to be heard of again on Wisteria Lane.

OK. So they screwed up. Yet two weeks ago, they pulled a stunt even more racist and bigoted than the Applewhite storyline monstrosity. I actually turned off the T.V. mid-episode and simply decided that I wouldn’t be tuning back in.

It was bad enough that the one “minority” couple on the show are the ones to actually abuse their immigrant housekeeper and eventually turn her into became their virtual “slave” surrogate mother. But then they had to pull the old, “that baby can’t be mine because it’s black,” joke which, if such a thing is possible, was already done more tastefully, in the very first episode of, My Name is Earl. At least on Earl, there was no implication that the baby wasn’t wanted because it was black, but on “Desperate Housewives,” I’m pretty sure that’s where they’re headed. (Went back and did a little bit of searching and found a discussion about this very episode here and the final comment here mirrors my sentiments exactly only with a bit more pissitivity mixed in on my end.)

Yet when I realized that what I’d tacitly accepted on one, I’d gotten angry about on the other, I just said goodbye to both shows. I watch too much TV anyway and quite frankly, I encounter enough racism in my daily life that subjecting myself to it while watching television shows that are supposed to be fun is, to put it lightly, a bit much. Actually, I don't think it's so much the black baby joke on My Name is Earl so much as that lately, I don't get to watch it anyway and secondly, it's not as good as it was the first couple of seasons. So I may as well, cross it off my list as well.
Posted by ThatDeborahGirl at 4:36 PM 2 comments: Links to this post