A Commentary on Racism

This post was originally an accidental double-post about snowfall in Cincinnati.

However someone chose to comment on this post about something I said on another blog Ir read frequently, Neurotic Iraqi Wife. The comments that come after are an interesting commentary about my post in particular and race issues in general.

In this case, it's the comments that are the post. Definitely an interesting read.
Posted by ThatDeborahGirl at 8:42 PM 9 comments: Links to this post

The Sky is Falling!

Honey child, let me tell you. Snow is serious business around these parts.

While many states have been dealing with snow for months, only in Ohio, specifically my little corner of the planet, Cincinnati, does snow engender such panic.

The local media breaks into every show and sometimes even commercials if the Doppler color coding turns even a little bit blue, pacing back in forth in front of green screens like a woman watching the stick to see if she's pregnant. Even if it's only going to be flurries, we are warned in ominous tones that snow is coming.

We listen to the media cry snow wolf so often that eventually we tune them out altogether. We tuned out all the way up until last Tuesday but that was a big mistake. The schools refused to release early because no one believed it was really going to snow and if did, no one thought it would be that bad.

So of course the snow started coming down exactly at the predicted time, 12 noon sharp. The soft pretty flakes soon banded together to form frozen immovable heaps and and did not stop until 8 p.m.leaving the ground covered with half a foot of snow. Before you could say,'Where's my kid?' traffic was snarled well past midnight with some kids not getting off the school bus until after 10 p.m.

Having gone several days with no new snowfall and the streets and sidewalks sufficiently clear everyone has been back to complacentville until today. Today the weather folk went into over-hype-drive predicting anywhere from 12 - 18 inches of snow for tomorrow.

A city once frost bitten, twice shy. The snow panic began shortly after the announcement. I went out to do my normal grocery shopping today and every store was full. Even my local Aldi which only recently began keeping Sunday hours was full. It seems my secret weapon for last minute Sunday shopping is no longer a secret. Everyone and their grandmother was shopping today as if the only way to survive the upcoming snowfall is to have blueberry pop tarts on hand (only frosted will do).

No one understands how Cincinnati reacts to snow better than internationally acclaimed local cartoonist Jim Borgman. His blog is absolutely wonderful and this entry at his site entitled "The White Death: A Portfolio" gives a picture perfect view of what snow in Cincy is all about.

powered by performancing firefox
Reference: BorgBlog: The White Death: a portfolio
Posted by ThatDeborahGirl at 9:48 PM 1 comment: Links to this post

Harry Potter and the Major Decision 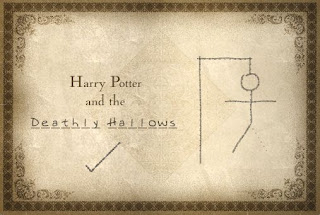 I don't mention it often but I have a deep and abiding love for Harry Potter. It's not the obsession it used to be, but I still really enjoy the books and the fandom.

In case you missed it (I don't see how, but lets just say) the seventh and final Harry Potter book will be released on July 21, 2007. As we speak, the book is finished and is being edited for final printing. The Wizarding World's fate is sealed on the shoulders of one fictional young man and I can't wait to see what happens.

Now for the Major Decision.

Ye Old Matey does not have the interest in Potter that I do. He plays the video games but he's not interested in a Potter conference. My daughter likes Potter a lot, but is still not as obsessed as I am. I also found out that the conference may be for adults only and though she'll be 15 then, she may be three years shy of being able to attend. I've emailed the Sectus staff for clarification but she may not be able to go due to age. If neither of them want to go, or if Arabella can't go, should I be selfish (and brave enough) to attend Sectus alone?

Mind you, a trip to London just doesn't happen every day in our family. It's going to be a major thing. It's scary to think I could leave them behind and I have all these mom emotions about doing so. Yet and still, I REALLY want to do this.

Still I don't know if I could go to London alone, knowing I left my family alone on the trip of a lifetime.

Your comments and opinions are REALLY wanted on this one. Fire away. In other words...