So, America is currently fighting in Iraq, Afghanistan, Pakistan and now Libya. Bombing is so "in" this season.

The current political discourse has disintegrated to levels that are so dishearteningly simplistic, I think ever Republican, Democrat and our new media beloved Tea Partiers have simply lost their minds. We have turned from the Representative Government the founders envisioned, or at least the one the American People have come to expect, to a de facto corporate controlled monarchy that leaves little room for people with less than a million dollars to even matter unless we maintain our value as "consumers".

On the home front, it's been a hellish winter here. The weather has been bitterly cold, save for one week of false Spring in early March. We ventured happily out into the warm weather only to be shut back in with cold and snow for the Cincinnati Red's Opening Day.

Our family has had a lot of illness. Ye-Olde-Matey has been in the hospital with pneumonia and is, at present, in ICU with an unknown illness that threatens to close his airway. Never have I taken off so much time from work due to illness. In addition to Ye-Old-Matey having been sick, I had good old fashioned influenza that knocked me on my but for a week and a half and later a bout of a 24-hour stomach bug that left weaker and wasted than the flu had.

Things aren't all bad. CollegeArabella won a couple of scholarships that will help her continue in college next year. Freshman year is nearly done and she's doing very well. I'm proud of her, but after a year, it's finally sinking in just how much we miss her and how this is only the beginning of her leading her own life. She will never be back home to stay. It's simply not her way.

I'm nearly done with my college adventure as well and after 3 years spent chasing a 2-year degree I am the oldest intern at an awesome company. I pray they will hire me when it's all said and done, but if not, then I have the job search of my life ahead.

So life is bittersweet right now. There is so much sorrow and death in the world. I have been to so many funerals this winter and heard of many more. It's as if the Winter Storms are purging more than tree branches and Nature's refuse, but must also take their human toll. However even the losses my family and friends have endured pale in comparison to the tragedies in Japan, New Zealand, Haiti.

And the wars. Not content to battle nature's elements, we insist on warring against each other. Every day death and sickness do not take their toll fast enough. We must hasten our own demise with war, murder, poverty, hunger, pollution; all born of sheer human ignorance and greed.

We're at war all right. But it's a fight we can only win by losing.

And America will never be losers. More's the pity.
Posted by ThatDeborahGirl at 9:21 AM No comments:

Honestly, I don't blame him. What good is an apology now?

I mean how many civillians can we kill before we stop shrugging off the deaths of innocent people.

I tend to take things like this very personally. Because I'm fairly poor. I don't have much anyhow, but thanks to my family, I get by. I send my daughter out into the world and I can only pray that she's ok.

But I simply cannot imagine a world where US soldiers pick off nine kids and we go back to life as usual.

I mean the 9 kids are bad enough. But what about the 5 children killed the week before that along with 7 adults? And the complaints from Afghan citizens that for all our talk about "smart bombs" and "precision strikes" we are indiscriminate in our killing.

Yes we. You. Me. Us. The murder of nine children was carried out for the sake of protecting freedom and liberty and keeping of safe from the terrorists. We're killing off children over there so we don't have to do it over here.

Only we just created a hell of lot more people who hate us...and with damned good reason.

I certainly would look on anyone who murdered my child or any child with hellish contempt.

How do you think I look I feel about my government right now?

How may more excuses can we make to continue this one-sided war?
Posted by ThatDeborahGirl at 7:37 AM 1 comment:

Think of 9 Children That You Know

Think of 9 children that you know.

9 children that you know and love. Or maybe a few them are little bad ass kids that are always acting up at church and never mind and stick out their tongue when you tell them to go sit down somewhere.

9 kids that are your children or grandchildren's friends. 9 kids that you've watched grow up when you see them as you drop your own off at piano lessons, or ballet or soccer. 9 kids with lives of promise of purpose.

9 kids who get shot down by US Soldiers - sorry, excuse me, pardon me - NATO soldiers.

And the world shrugs. We apologize.

But your 9 kids - out picking up firewood and climbing dangerous hills where everyone knows it's possible to get shot.

A world away from here.

Taking a moment off the political and personal soapbox for some fun.

Today, March 1, is Dobby Remembrance Day. Yes, it's a Celebration of Life for the House Elf from Harry Potter. So I took all my Harry Potter books to work, a LEGO recreation of the moment Dobby is freed from Luicious Malfoy's harsh employ and some finger foods to work today.

I laid out the food in my cubicle, hand delivered some invitations to my co-workers, threw some frozen meatballs in the break room kitchen and watched the fun unfold. People came and ate and we watched a couple of Dobby tribute videos on You Tube. Some people had no idea who or what a Dobby was, but thankfully, there were a few Potter fans on hand who got the idea. Whether you "knew" Dobby or not, a good time was had by all. 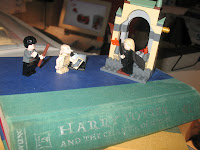 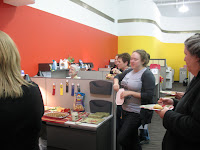 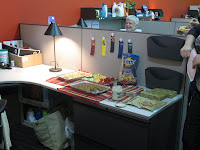 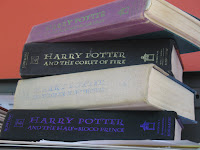 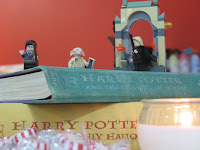 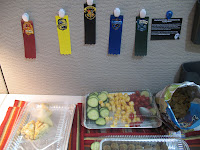