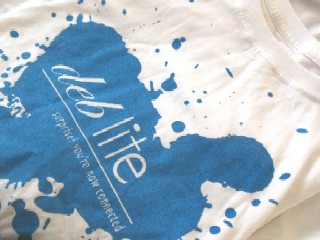 What happens when you combine five years of blogging, an impending anniversary date, a screen-printing class and the twisted mind of the Notorious TDG?


The Contest
In the spirit of Gilderoy Lockhart, the majority of the questions are about me and the blog. To commemorate 5 years of blogging, I’m posting 15 questions, all of which can be easily (or maybe not so easily) answered by perusing the 5-year annals of DebLite.

The Prizes
I’m currently taking a screen-printing class. Of course the first thing I did was make DebLite t-shirts; and though it’s going to be very hard to part with them, I’m giving away five of the shirts I made as the prizes for the contest. Believe me, they are truly a labor of love and I do love my readers. You all make me happy!

Why John Boehner Deserves to be Booted Out of Office

...House Republican Leader John Boehner told an audience yesterday at the American Enterprise Institute, a Washington-based group that favors smaller government. “You can’t have a healthy economy if you raise taxes on those that you expect to reinvest in the economy and hire more people."

Yeah. Especially if the people you raise taxes on pitch and moan about having their taxes raised a lousy 3% and will hold their breath until they turn blue before they see this country get back on it's feet. Especially if that means they have to actually hire from among the plebian masses.

The tax cut that Republicans want - they already have it. They're fighting to keep it. How many people are getting hired due to this tax break right now?

I think we can safely say NONE since employment is at disheartening record breaking levels.

So just let your soul glow orange John Boehner wants us to believe that if companies get to KEEP the sweet ass tax deal they got under George W. Bush, then and only then will they start hiring. Otherwise, they just can't afford it. Sorry, no jobs for you America.

And if you believe this cadswallop I have a bridge to sell you.

This is what Corporate Owned Republicans want you to believe. If you bail out their banks and funnel our tax dollars to them so they can maintain more of the wealth they already have - then they'll generously pass on a few measly 8 or 9 bucks an hour back to us in the way of jobs. Hell maybe even 10 bucks an hour. Why not? The sky is the limit.

As long as they get to keep their sweet tax breaks gifted from W.

It's effing blackmail is what it is. And what I say is to hell with Boehner and the rest of the GOP who want to hold America hostage. This country is still bleeding jobs. Most major corporations are sitting on surplus cash and they refuse to hire people.

As Flava Flav and Public Enemy once cautioned us - Don't believe the hype.
Posted by ThatDeborahGirl at 5:57 PM 1 comment: