Steve Chabot is full of shit 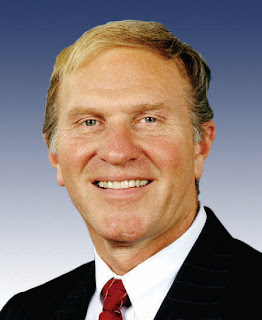 Thought I'd jump online and attempt a live blog session because I'm listening in on Steve Chabot's Town Hall Meeting he conducts over the phone.

He says he's afraid of going to President Obama's meeting on healthcare because it's just a plan to "sucker" the Republicans. President Obama will be controlling the whole thing.

Someone came on the line and asked me my name, what neighborhood I'm from and what my questions are?

I told her that I'm Deborah and that I've participated in this several times but never got to ask a question. I tell her I'm from North College Hill which is probably why.

"No," she assured me with a chuckle that let me know she understood exactly what I meant, "We love North College Hill. So what's your question?"

I asked, "Do I have to tell you what the questions are or can I just ask him."

She told me that I had to tell her first and I guess they give the questions to him before he answers.

Now mind you, while I was on the line, I heard Chabot explicitly express his support for the violent Cincinnati Tea Partiers. Not only did he state that he spoke for them at their most recent rally on Fountain Square but also that they represent a lot of good ideas for America.

He also stated that President Obama's Healthcare plan is just a bad idea all around.

So my two questions.

#1. Could Chabot name at least two things that President Obama could change in order to have him give the Health Care bill his consideration. Not his full support, but to even consider it?

I told her pass that too him and also from me, to tell him Good luck with that. The lady on the line chuckled again and put me back on hold, listening to the Town Hall.

I knew I didn't stand a chance in hell of getting to ask Chabot THOSE questions. But at least in the past, I've been allowed to stay on the line and listen to him curry favor with folks from Delhi, Green Hills and any place where he knows he has conservative white support.

Well this time, I was allowed to stay on the line about another 10 minutes and then the call disconnected.

Yep, they hung up on me.

Chabot was only spouting the most insidious Republican Talking points and reinforces their trite memes and then he hung up on me.

If he can't take the heat from me - a nobody with an unread blog - how the hell does he have the cajones to represent ANYONE - mindless teabagger or no - in Washington?

Steve Chabot, I'm calling your bluff. You've never answered a tough question in your life and you wouldn't dare sit down with me, let alone Obama, one and one and really get down to the heart of what your constituents -all of your constituents, not just richest and the whitest- need.

Chabot is full of shit and a scaredy-cat too.

Call Chabot's campain line at 481-9988 and tell him that his Tele Town Halls are useless tripe.
Posted by ThatDeborahGirl at 7:46 PM 2 comments:

A message to John Boehner from Jesus

“A Jewish man was traveling on a trip from Jerusalem to Jericho, and he was attacked by bandits. They stripped him of his clothes, beat him up, and left him half dead beside the road. By chance a priest came along. But when he saw the man lying there, he crossed to the other side of the road and passed him by. A Levite walked over and looked at him lying there, but he also passed by on the other side. Then a despised Samaritan came along, and when he saw the man, he felt compassion for him. Going over to him, the Samaritan soothed his wounds with olive oil and wine and bandaged them. Then he put the man on his own donkey and took him to an inn, where he took care of him. The next day he handed the innkeeper two silver coins, telling him, ‘Take care of this man. If his bill runs higher than this, I’ll pay you the next time I’m here.’ “Now which of these three would you say was a neighbor to the man who was attacked by bandits?” Jesus asked. The man replied, “The one who showed him mercy.” Then Jesus said, “Yes, now go and do the same.”Link

We need healthcare man. Quit being a jerk and start working with President Obama, not against him. This last part is from me, not Jesus, just FYI although I'm pretty sure Jesus would think you're a merciless jerk for what you're doing to your constituents. Oh, and merciless jerk is a lot nicer than what I wanted to say about you, but I can't use the words I would have liked to have used and post about Jesus at the same time. That would be wrong.

Kind of like your opposition to the President's health care fight.

It's Only Satire: Sarah Palin is an Effing Retard