Yeah, It Was a Flashback, Thanks Nikki

My school schedule has me neglecting my blog lately. I had visions of returning to blogging with a bit of panache and some insightful prose about the state of the nation, the economy, and my shock that Obama will truly be our President.

However I find today, that I can only mirror a post from my sister Nikki X over at The Black Fist Blog and write about: Trick Daddy.

This post is really a long response to hers, but it was one of those meanderings that would have taken up far too much space on her blog - would have been longer than the post itself - and it is rude to hi-jack someone else's space that way.

Having pretty much disavowed the travesty that had become hip hop and the glamorization of thug culture, it was against all odds that I fell in love with the thinnest of beats that summer...I'm pretty sure I saw the video first...I rarely watch BET but I was out of work, bored...and after that first time, anytime I heard the song I was bumpin' it. Ye Olde Matey would look at me in awe.

I don't know. Was it because I was out of work, again through no fault of my own....yet another business "restructuring" due to the economy- and why I feel the need to add that quantifier - why I should feel ashamed for being out of work for any reason in the age of the disposable worker - Hell I don't know.

But back to that summer...the hot days I spent bootleg driving out of desperation from joblessness (and even after I finally found a gig to supplement my income).

Trick Daddy asks the most important question first and foremost:

Could it be my baggy jeans and my gold teeth that makes me different from ya'll?

I mean bootleg cab driving doesn't exactly make me a thug but it certainly makes you invisible to anyone who doesn't need a ride. Dress too nice, you get no sales. Dress too bummy even people who desperately need a ride will be scared of you. It's hard to embrace the right look as effortless as Trick Daddy who wears his baggy jeans and gold the way all young men in his position do - we may protest but no matter what they wear - they will always be the outsiders - they may as well be comfortable.

I certainly had my moments where I, like Trick Daddy wanted to say F**** the po po's - through observation of how the police literally stalk our people, to the point where they can't even buy a ride home from the damn grocery store in neighborhoods where cabs are slow to come or find little ways to stall the ride and jack up the price to $15 for a 3 block ride and then don't help carry a damn thing or charge you for wait time while you load or unload. Seriously? Fuck 'em.

And once I got a gig - how quickly I went back to blogging and my pseudo-middle class life like nothing had happened. How easy it was to go back to being righteously indignant over hip-hop and forgetting the days of helping young women struggling with toddlers and groceries for a few bucks a ride. And after I dropped them off, I spent the one summer of my life, turning my radio on full blast, booming my bass even, nodding my head in complete and utter concord with Trick Daddy...

I don't know
What this world's gonna bring
But I know one thing
This is the life for me...

Trick Daddy goes on to say: Fuck the judge and CEO's, Fuck the DA and PO's - and honestly, I think back to my ballot in this past 2008 Election where the likes of Joe Deters and Simon Leis ran unapposed and that ambulance chasing Mike Allen still having a law license and that not one, but two white women have gotten away with literally KILLING their children....and hell yea, I'm with Trick Daddy on this one. Fuck 'em. Fuck 'em all.

No man is an island and no man is all one thing. Lest you think Trick Daddy is a thug and thug only - watch the video - the mini-operetta interuption mid-video is more than a camera trick, more than a device - it's almost the point of the video-

He, we, all of us, are more than the sum of our parts - and none of us live alone. His thugishness makes our un-thugishness possible. He's doing the dirty work - the work that will be done regardless - and leaving us to the trappings that hide the dirt.

Cuz he's a thug.
All day every day.

Nah, Trick Daddy - despite all outward appearances, you right. I'm not different from you after all.

Not at all really.

This Was the Revolution. It WAS Televised

Barack, Michelle, Malia and Sasha:
Welcome To the White House!
Blessings To You All! 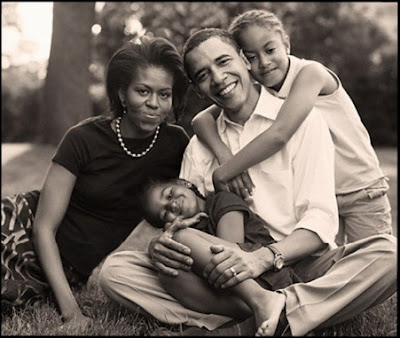 You ain't got to go home...but please don't step on the White House Lawn as you head back to Crawford, TX, Wasilla, AK and all points west.

This was the revolution. It was televised.