Opposing the Cincinnati Streetcar: That Train of Thought Has Left the Station 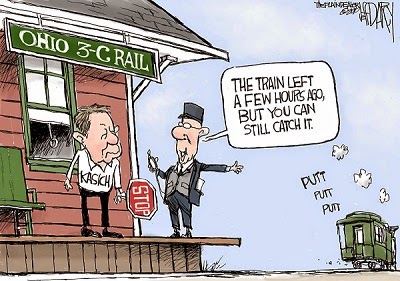 Until I came across this article on Twitter today, I had no idea that there were still people trying to get the Cincinnati streetcar project canceled? Really? They need to let it go already.

I say this as someone who is really against the streetcar project. It's just another toy to make life easier for the folks who are "gentrifying" downtown. "Gentrifying" is a word used here which means political speak for pushing poor black people out of a neighborhood to make way for rich white people.

Two years ago, Mayor Cranley officially announced the conclusion most of us had already drawn - that it would cost just as much to cancel the project as it would to go ahead and finish it given the time and money already invested. So we may as well build the thing and be done with it and that's what's happening.

A lot of people, myself included shrugged, popped some popcorn and waited for tales of shoddy management, cost overruns and construction delays. We've gotten that and more.

Right now the latest contention is that some folks took it upon themselves to have a study done for phase two of the project when phase one isn't sure to complete any time soon.

What's going completely unnoticed as usual is the lives of black people being rearranged for the convenience and pleasure of white people who demand their space, take it over and don't really give a damn about much else.

Even so, fighting the streetcar at this point is just stupid.

What this city really needs is light rail. And what the state of Ohio needs is to get the 3C Rail Project back on track. According to Wikipedia, the state funds for the project are still on hold. It's not the same as having the federal dollars John Kasich gave up because being a jerk to President Obama was more important than helping the people of Ohio, but it's a start.

But hey, why meet the needs of the working majority when you can cater to the rich and powerful few?

Posted by ThatDeborahGirl at 1:48 PM