Michael Richards and the N Word 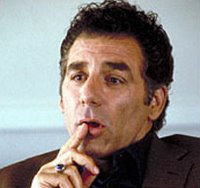 So, Michael Richard's got mad at some black hecklers and called them "nigger".

A couple of months ago, I probably would have done a long angry rant about it, but it's interesting how a few months of getting called "nigger" at least once a week by white people can change your perspective.

I play Yahoo Hearts sometimes. When I'm mad at my kid or just need a quick escape from my ever-present nemesis, The Laundry, I take it out on the servers at Yahoo and play Hearts. I use this icon:

You would be surprised at how that little icon inspires such hatred, epithets, and full out racial tirades. Yahoo has an option that allows you to filter out curse words and other non-desirable words so that instead of "stupid nigger bitch" what you would see is "stupid @@@@@@ @@@@@". However people go out of their way to defeat the filter by typing things such as "stupid "ni99er beach" and the like.

You also have the option to "ignore" other players once they say something stupid. However even though you can put players on ignore and you will not see another thing they say afterwards, it does not quite mute the initial shock and hurt.

Yes, even from perfect strangers who I will never see or play a game with again, these words are shocking and hurtful. Most days I am able to laugh it off and simply use the filter and ignore options. Other days I ask a simple question to which I have never gotten a good answer:

Why would you say such a thing?

I beg to differ. And not because of how many times I've been called nigger on Yahoo. But because inevitably, the other two players stay conspicuously silent during these times. Not once has another person ever spoken up and said, hey, that's not right. Hey, let's not use language like that. Hey, you should apologize.

These are the people who worry me. Because like their real life counterparts, these are the ones who silently consent to seeing a fellow member of humanity humiliated even if just for a moment in a games chat. All my life it's been the same way. It's never been the folks who called me nigger that hurt my feelings as bad as all the white folks who called themselves my friend, yet stood by and said nothing when such things have happened.

A quote in this article already claims that this will be the end of Michael Richards career.


"I've never seen anything like this in my life," [publicist, Michael]Levine said Monday. "I think it's a career ruiner for him. . . . It's going to be a long road back for him, if at all."

The media is already setting him up for a drubbing that no amount of apologies and explanations will suffice. A local newscast wouldn't play more than 30 seconds of the clip explaining that it was "too offensive." I find this extreme political correctness amusing because anyone who's seen a rerun of "The Jeffersons" on TV Land knows that the FCC doesn't care and most people don't either.

I've heard it explained to me again and again that white folks are afraid of addressing racial issues for fear of "saying something wrong". And I'm always asked the question, "If I do say something wrong, then what do I do?"

Richards and other white folks who find themselves in this position shouldn't try to explain why they said whatever they said. Explanations are moot and only make things worse because at the base of this word lies so much ill will and plain nastiness that it makes my heart heavy and my mind ache. Such breaches may never be filled or healed and certainly cannot be explained away.

The only thing to do is apologize. If it's rejected, you have to apologize again for goodbye and live with it unless you can do something that will convince someone to forgive you. Richards has apologized and he should let his apology suffice then wait for the whole thing to die down. He lost his temper, said something ugly in the extreme and there is no excuse for it. Period.

An apology and a lifetime of never saying such a thing again - and speaking up when other folks make the same misstep - will do.

How bad was it? You decide.

Michael Richards and the N Word